Because you’re all gonna die hilariously and incurably HAPPY…almost all at once! That is: within a relatively short span of 24 hours, the time it takes this wobbly old orb to complete a single rotation on its axis! It will be the result of a fortuitous blending of certain greenhouse gases that scientists did NOT foresee because too busy fighting off angry hordes of bible thumpers breaking into their research labs. A particular blend of nitrogen and oxygen triggered by an experimental release of nanoparticles way up in the clouds and across most of the Arctic Circle–which formula the United States (in conjunction with Bayer/Monsanto and Dow/Dupont Chemicals) deemed top secret–had caused a sudden and impressive blanketing of all hemispheres (north, south, east and west) with nitrous oxide.

Needless to say, there was a MASSIVE migration at unprecedented speed to the Hawaiian archipelago, as that spot was the closest habitable land surface to the international dateline. Foolish humans, what do THEY know? For encroachment of this invisible and inescapable wall of laughing gas could not be bound to an arbitrarily determined longitudinal agreement as to when each day begins and ends! All THEY knew was that the final spot to be smothered would happen within 24 hours at the latest. But where that final spot would be, scientists were NOT able to determine, because there just won’t be enough time! Besides which, all their meteorological databases will have been sabotaged by Army of God, Promise Keepers and Westboro Baptist Church hackers before then! Who emphatically believe that the remaining oasis of all living creatures both great and small would be Jerusalem and its outlying environs…and that a platoon of angelic starships would be waiting to whisk them away to the promised land, somewhere around the vicinity of the dog star, Sirius. (Interesting side note: a biplane waving a banner from the rear with the words “God Hates Fags” was spotted for a brief moment by an Israeli tourist, who uploaded the video to Youtube, only moments before she perished in a cloud of laughter.) Meanwhile, back in Hawaii:

Being that the land area of the total surface of all islands in that archipelago is way too minuscule to accommodate the vast number of desperate-but-guffawing refugees mounting to upwards of half a billion, most were summarily pushed into the Pacific Ocean to drown, or shoved upwards along the steep slopes of all six active volcanoes in that region by vast, crushing herds of human cattle…and over the edge and into the fiery pits of bubbling magma, while laughing their asses off! Surely, the merciless goddesses Kilauea, Mauna Loa, Hualalai, Mauna Kea, Lo‘ihi and Haleakala, will enjoy the most stupendous feast of human sacrifice in the entire history of their inconceivably archaic lives.

Exactly WHO will have the last laugh is not yet known. Or perhaps such a factoid is verboten to your flabby, excrescent and ignorant species, by decree of the Great Old Ones (Chaugnar Faugn, Cthulhu, Zushakon, Sebek, Atlach-Nacha, Tsathoggua and a bunch of others whose names are unpronounceable by human tongue). Who are ruled by our eternal and profusely intolerable malodorous Outer Ones who exist out of time, before time, and all around time. NYARLATHOTEP BE PRAISED, ALL GLORY TO THE COSMIC HYPNOTOAD! But one thing is certain: he or she will go down in intergalactic history as earth’s final buffoon. Why intergalactic? Because history will no longer be a thing on planet earth.

In a nutshell: Homo sapiens ignoramus will all die of explosive mirth some time next year. And if you are laughing right now, be warned: the end times are imminent! 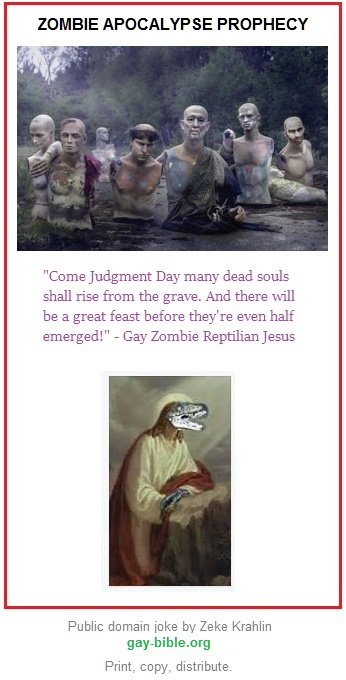 This entry was posted on Tuesday, December 29th, 2020 at 11:42 am and is filed under fiction, satire, sci-fi. You can follow any responses to this entry through the RSS 2.0 feed. You can leave a response, or trackback from your own site.

Add to this story with your insightful comment: Cancel reply